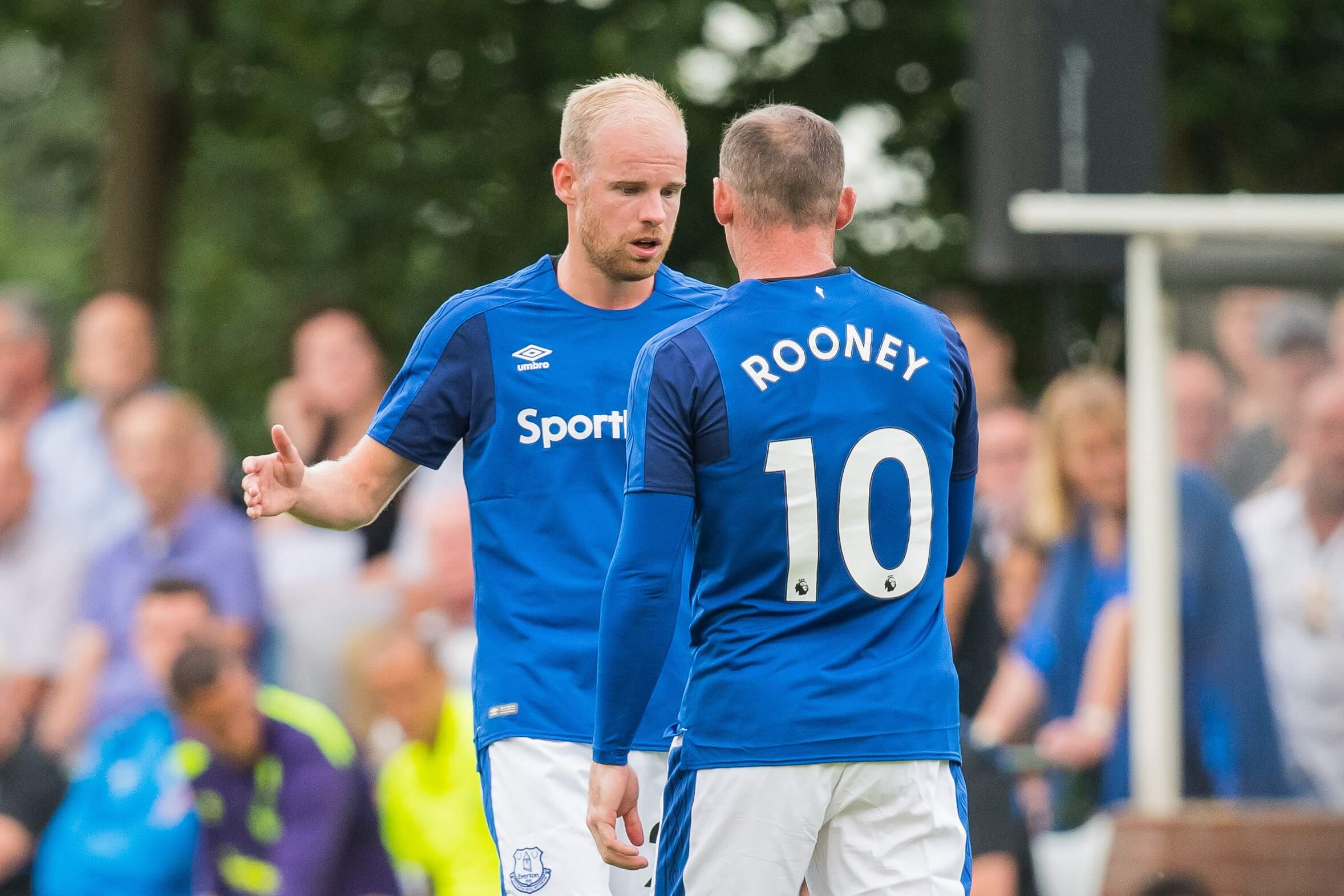 “I put my money where my mouth is, you know, that’s the most a landlord can do.”

It has been nearly seven years since Farhad Moshiri emerged as the answer to Everton’s long and turbulent investment search, initially buying a 49.9 per cent stake and promising to “give them everything I have”.

This last part wasn’t about giving Everton every last penny of his £1.7 billion fortune, but he certainly made that impression at times, investing more and more money into the Merseyside club. That includes the extraordinary pledge to “spend as much money as needed” on building their new stadium as well as a series of massive capital injections, including a further £100m last January.

Fair play, this is the money situation – for him Money, he is always eager to locate your mouth. For that, at least, Everton supporters are grateful, which is likely why protests against his regime tend to be directed at others, such as chairman Bill Kenwright and chief executive Dennis Barrett Baxendale, rather than the owner himself.

But Moshiri is gravely and worrisomely wrong if he feels, as he put it in an interview with UK radio station talkSPORT last week, that putting “my money where my mouth is” is “the most a landlord can do”.

it’s not like that. Just as it wouldn’t be enough for someone to shower their partner or child with expensive gifts and say they did everything they could to make them happy.

The most a football club owner can do is care enough to take care of it – in the short, medium and long term. Yes, this usually involves investing…but sensible investing rather than the unproductive, unsustainable, wild and capricious kind of spending.

And if we’re talking wild, choppy and volatile spending, we need to talk about Chelsea, whose first two transfer windows under the ownership of Todd Bohle and the Clearlake Capital consortium were just that.

The £273m they spent last summer – more than any English club spent in one window – has made no improvement whatsoever, so the first two weeks of this month have brought more than the same: £35m for France defender Benoit Badiachel, 8 Millions of pounds for Ivory Coast striker David Datro Fofana, a staggering £17m deal to get Joao Felix on loan from Atlético Madrid for half a season and now, incredibly, an expected £88m deal to sign Ukrainian winger Mykhailo Modryk from Shakhtar Donetsk.

And they haven’t finished yet.

It reminds us of something Ian Watmore said during his very short stint as chief executive of The Football Association just over a decade ago.

Terrified at discovering some excesses in a world he previously viewed as an outsider, Whatmore sighed as he spoke of how many sane and successful people “leave their best judgment behind at the gates” when they enter the football industry.

Increasingly, modern football is populated by people who do the opposite.

Brentford and Brighton & Hove Albion are among the most extreme examples of clubs that have approached the transfer market with the kind of innovative data-driven strategies traditionally associated with other firms, but Liverpool and Manchester City have also drawn praise, as have Arsenal, who are starting to patch things up after years of drifting. Under the ownership of Stan Kroenke.

This means that those who do the opposite are left with a sore thumb.

Across European football, there is a growing distinction between clubs that operate on a clear vision or plan and those who are easily given to whims or whims or who are easily swayed by the advice of vested agents.

Tony Fernandes had been in charge of QPR for two years, and blamed the West London side’s difficulties on the various managers he had hired and fired, when he admitted his mistakes.

“I think I was naive,” said the aviation tycoon after being relegated from the Premier League in 2013. “You get excited, get carried away and throw away all the things you’re good at, like planning and analyzing. I was naive in thinking everyone else was like me. I think I allowed myself to be taken advantage of.”

It’s rare for an owner to admit he’s been ‘drifted’ or ‘taken advantage’ – rather than passively acknowledging ‘mistakes made’ in Moshiri’s open letter to Everton supporters last summer – but it’s an all too familiar story.

New ownership groups tend to be desperate to make an immediate impression, and try to turn things around overnight.

Even successful systems like those at Manchester City and Liverpool have had to learn from their early mistakes. The kind of consistent and sensible hiring decisions Newcastle United have made in the two transfer windows so far under the new ownership is far from the norm.

Moshiri also claimed in the TalkSPORT interview that “some of the decisions we’ve taken” have been taken jointly by the Everton supporters. “All the managers who left were driven by the fans, not by me to begin with,” he said.

This is a dubious claim. But if Moshiri believes this, it is troubling.

For an owner who suggests he’s been swept away by popular sentiment time and again, that’s not a good look, especially when his system seems so impervious to criticism when it comes to other areas, such as supporters’ own calls for modernization and board-level transparency. .

The tone for Moshiri’s years at Everton was set in the summer of 2017 with over £150m spent on a mixed transfer that still left the team virtually devoid of pace, width and penetration in attack. In isolation, many of those deals could be justified. But they all looked so mixed up. “What’s the plan?” We wondered — and we’ve been wondering almost ever since.

Ask the same question about Chelsea during this and last transfer window.

Some of the fees they’ve agreed to pay are mind-boggling, but they’re not alone in that. The really baffling thing is the sheer number of players signed.

They were already well stocked in attacking areas even before they splashed out £47.5m on Raheem Sterling and £10.3m on Pierre-Emerick Aubameyang in the summer and passed Christopher Nkunku’s £52.7m release clause at RB Leipzig to line him up for the next season. Now they have added Modric and Fofana, as well as Joao Felix on loan, and are also in talks with PSV Eindhoven for England Under-21 winger Noni Madueki.

Davy Claassen, left, and Wayne Rooney are two players signed by Everton in the summer of 2017 (Photo: VI Images via Getty Images)

This type of aggressive spending often causes fear among competing fans, managers, and owners. But in this case, everything looked very scattered.

It was often said about Chelsea under Roman Abramovich’s previous ownership, particularly when it came to the number of young players signed without any clear plan to integrate them into the first team. Some, including Kevin De Bruyne and Mo Salah, have come and gone and then forged highly successful runs elsewhere in the Premier League. Many other excellent prospects are stagnant, unable to see a path to the first team at Stamford Bridge.

Perhaps this Chelsea system is smarter in this regard.

The appointments of Graham Potter, Christopher Pfeiffel, Paul Winstanley, Lawrence Stewart and Joe Shields (formerly at Brighton, Leipzig, Brighton, Monaco and Southampton respectively) amount to the kind of mental confidence that was sorely lacking in the summer when Bohle was leaving at the time – coach Thomas Tuchel resented jumping from deal to deal. other as “interim sports director”. But from the outside, Chelsea’s January trade is still quite reckless – despite the talent of the young players involved.

At Everton, meanwhile, they continue to pay the price for past transgressions – not only have the various football managers and directors who have come and gone, many privately lamenting the difficulties of making their voice heard, but the way the erratic club spends under Moshiri has resulted in huge losses. It left them (at the Premier League’s generous discretion) little room to maneuver if they were to comply with the financial regulations.

As their current manager, Frank Lampard, said before the transfer window opened this month, financial constraints mean Everton have to be “sensible” and “work smart”.

This seems like a very reasonable starting point for any club at any time. In the case of Everton under Moshiri, this was imposed on them. And, like last season, the question is whether they can, by operating under these restrictions, pick up enough points to stay in the Premier League and avoid the financial nightmare that would come with a first relegation since the 1950s.

Should the worst-case scenario happen in May, you can be sure Moshiri will be on talkSPORT again to lament – “mistakes were made” – and to say he’s put his money where his mouth is, which is the most a landlord can do.

But it is not. It is not enough to just spend and hope for the best. Bad spending, without a clear plan, creates more difficulties than it solves. “More money, more problems”, as Potter said early in the season when asked about his future, suggesting that the grass might not be greener away from his job as Brighton manager.

A few weeks later, he went to Chelsea to replace Tuchel, confident that he could build a winning team from the large pool of talented players that he would inherit there. But the past four months have only confirmed what Potter said earlier about the difference between those clubs with a clear vision and strategy, like Brighton, and those with more money than they seem to know what to do with.

Spending is one thing, but in this age, more than ever, there needs to be a plan.

the athleteSpanish football coverage has expanded…