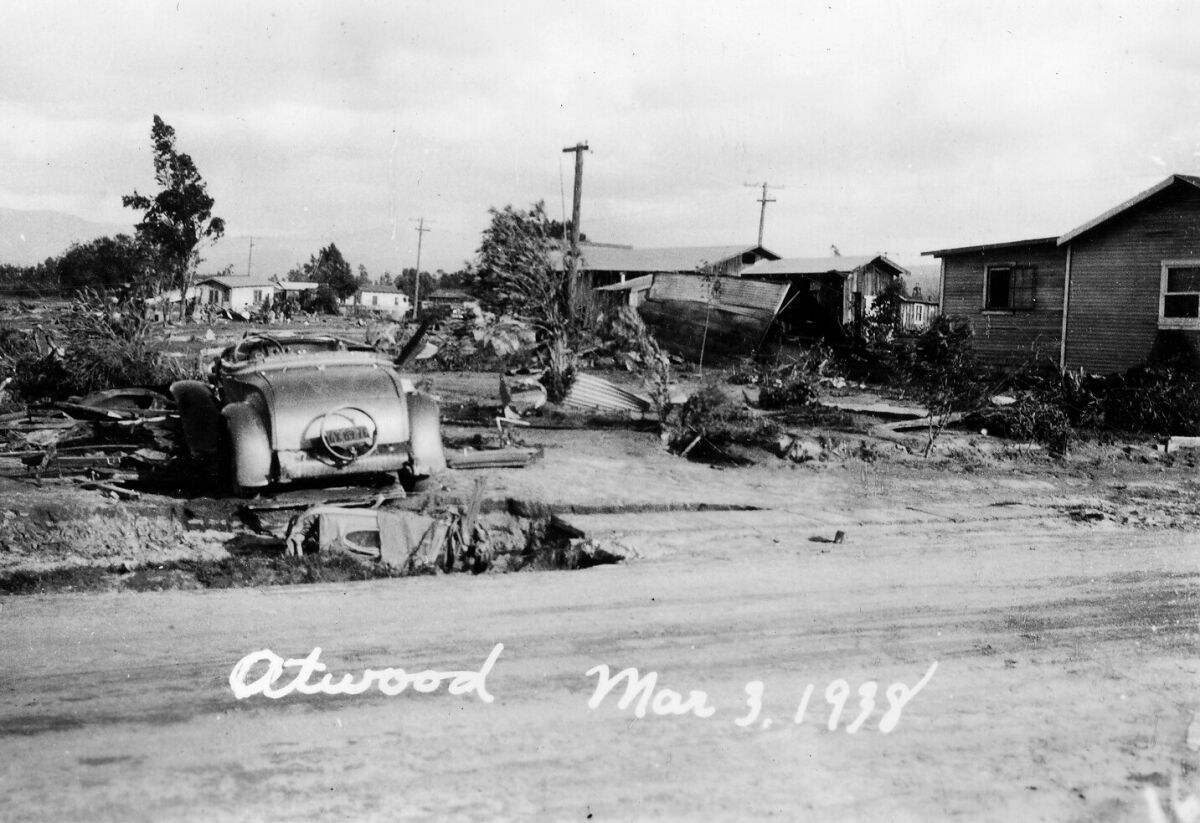 My umbrella was wide and sturdy, and my rain umbrella was insulated and yellow like a Minion. I wore thick Dickies and a good pair of Doc Martins.

It doesn’t matter. Just minutes after I stepped out of the Yukon to wander Parque de los Niños in Placentia’s Atwood Barrio last week, I was completely overwhelmed.

Strong winds made the whip of rain at an angle of 45 degrees. The drops hit the baseball diamond with such force that the clay jumped through the air.

At the southern edge of the small park, the water in the Atwood Canal is little more than a pond. But by 9 a.m. that day, with rain pouring down but not quite as hard as forecasters had predicted, the concrete wash was sloppy slops, rising fast.

Eighty-five years ago this March, this historic Mexican American neighborhood was hit by the deadliest flooding in Southern California history. Five days of intense storms caused all major rivers in the area—the Los Angeles, San Gabriel, and especially the Santa Ana River—to overflow their banks.

Bridges bent like wet noodles. Houses collapsed. Steamboat crashes in downtown Los Angeles. The area from Placentia to Santa Ana has turned into a shallow lake. Thousands were left homeless. Regionally, the Army Corps of Engineers estimated that the disaster caused $78.6 million in damages — $1.7 billion in today’s money — and killed 87 people, with another nine reported missing.

Almost half of those killed – 43 according to historians – were Atwoods.
I have known about the Great Flood of 1938 since childhood. Its destruction was part of our collective memory of Anaheim growing up in the ’80s—taught to schoolchildren, remembered by seniors. It’s been on my mind all month—not just because of the upcoming 85th anniversary, not even because of the parade of storms that have dumped historic rain and snow across California.

What makes me think of the disaster is there are so many social media posts asking why our ancestors paved the rivers, creeks, and creeks in Southern California to make it easier for rainwater to rush toward the Pacific Ocean, instead of figuring out how to keep all that precipitation at bay.

Civic leaders embarked on a decades-long campaign to build dams, flood control channels, reservoirs and water basins to protect against something like this happening again.

In fact, the Corps of Engineers did not consider the Santa Ana River safe from a 100-year flood until the 1999 completion of the Seven Oaks Dam in the San Bernardino Mountains.

We collectively lived away from a catastrophic flood because of all this infrastructure. However, the only outright aftermath of the Great Flood of 1938 is in northern Orange County, in places like Atwood. So I made a point to visit them on a windy day.

This week, heavy rains hit the state again. Back-to-back storms have killed at least 17 people so far, and damage could reach or exceed $1 billion. In the Los Angeles area, some neighborhoods were flooded, but rivers remained contained in their concrete channels.

More storms are expected during January.

Nobody was outside while I strolled the Parque de los Niños for about half an hour in the pouring rain. There was no sign commemorating the victims of the Atwood flood in the stadium or outside the community centre. I walked toward a huge, recently restored Chicano mural on a brick wall separating the homes from the barrio’s flood control channel. There may have been a subtle homage between the images of Aztec warriors and Spanish conquistadors.

Halfway through the mural, I finally see it: a section showing people being washed away by black waves and a bright blue river.

The Atwood Canal runs parallel to Orangethorpe Street, which took me to my next stop: Melrose Elementary School in Barrio La Jolla in Placentia.

This was once the site of the La Jolla School, a Mexican-only academy established in the apartheid era. On the night of the Great Flood, Principal Chester Whitten went through the neighborhood and urged residents to take shelter on campus. About 400 people spent the night sitting on tables and chairs as the flood waters rose. Six La Jolla residents died.

A plaque at the base of a group of flagpoles tells this story. The Melrose school bell rang when I read the inscription, but no students rushed out of their classrooms—it was still winter break.

So I went next door to the Witten Community Center. On the short walk, I noticed an overgrown flood control channel separating the school from the center.

Inside the low-deterioration facility, she encounters a group of young men who work for the municipality of Placentia. I asked if any of them had heard of the Great Flood of 1938. No one had. When I told them about the havoc I had caused, their jovial tone turned serious. When I mentioned Witten’s heroism, their eyes shone with pride.

Then 24-year-old Nalani Furumoto spoke. “I an act Find out about it!” she asked. “I watched a YouTube video.”

When I asked if the Witten Center had any memorabilia with the same name—perhaps something in a display case or a poster—Furumoto said, “Didn’t we used to get a framed picture of him?”

I asked if anyone wanted to find her. Nobody did.

My tour ended in my hometown, at the Anaheim Central Library. This is where I spent much of my childhood and where I first learned about the Great Flood of 1938.

For decades, you’ve watched the 1920s-era wooden Pinocchio doll—think the slender wand figure in Guillermo del Toro’s version of the tale, not the angelic child in the classic Disney animated movie—perch on the library’s children’s room from a rocking chair.

As children, we learned how Pinocchio survived the Great Flood of 1938 while his caretakers drowned. But stories come and go, and I haven’t seen Pinocchio in his usual place. I was afraid the staff would banish it to storage in favor of newer legends like Captain Underpants or the Paw Patrol.

Librarian Angelica Sauceda Garcia pointed me in the right direction: near a poster of Arthur waving from the beloved PBS cartoon. Pinocchio was as unassuming as I could remember and looked the same, except for black construction paper taped to the bottom of his chair.

“So it doesn’t fall when earthquakes happen,” Socieda Garcia said with a chuckle.

“People come looking for him all the time,” she continued. “He’s a hero.”

Sauceda García tells the story of Pinocchio’s flood any time the children make the rounds of the Central Library. David and Lenora Swanson owned a doll hospital and were raising Pinocchio—who had suffered a broken head, broken nose, and broken leg during the 1933 Long Beach earthquake—to Anaheim children’s librarian Elva Haskett when the Great Flood hit. The Swanson family drowned when their car with Pinocchio was flooded.

Tell them this shows them this [the flood] said the librarian. “People died. So they are always very impressed [Pinocchio]. It encourages them to be brave.”

The rain stopped when I got out again. The sun was starting to break through.

What Southern California has faced so far has been bad but nowhere near as devastating as 1938. Lest I forget it, I waited for a reminder as I approached Orange Crush on Interstate 5.

Below me is the Santa Ana River. was flowing. Quickly.