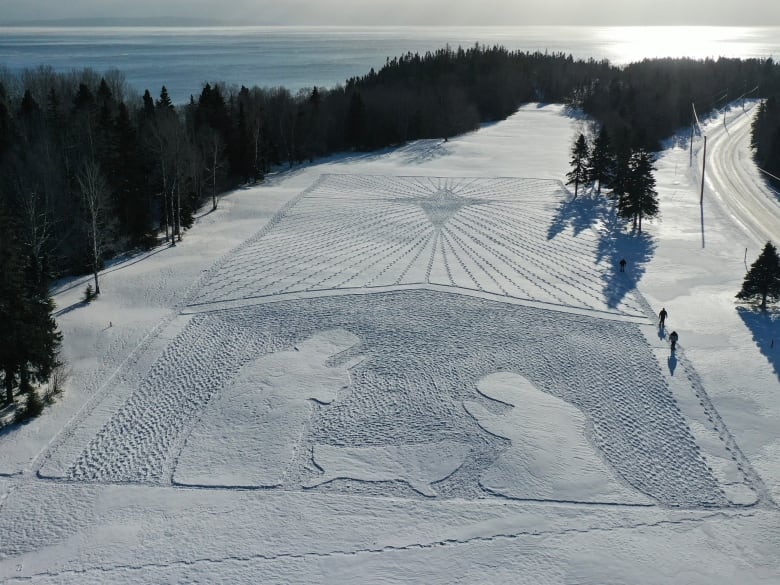 A retired headmaster has made the most of a northern Ontario winter by turning snow and ice into art for the past four years with ice sculptures and snowshoe art – large-scale patterns in frozen fields and lakes made of snowshoe trails that can only be seen from the sky .

CBC News featured Asmussen’s shoe art two years ago. Since then, he has continued to expand his presence, capturing his designs through drone photography and sharing them on social media. But it was a slow start this year due to the lack of snow.

But he managed to make a few pieces, like a snowflake and a nativity scene. The latest piece has gained a lot of traction online with thousands of likes, comments, and shares.

“It just makes you think, keeps you creative, and the nice thing about it is I try to get people out there to help as much as possible,” he said.

He said the concepts take a lot of planning, but they come together fairly quickly when he has a team to work with.

“It’s a social thing for people to come and help as well, and it’s really interesting when someone’s out for the first time and they really don’t have a concept of what we’ve done,” Asmussen said.

“It’s great, just to hear the reactions of the people who helped when they saw it for the first time.”

For a few years now, Asmussen has wanted to bring a snowshoe art festival to the region. But the problem is that they are subject to the whims of Mother Nature. It’s hard to plan ahead when he can’t predict how much snow will be available to work with. And if it’s a cloudy day, it’s hard to see the designs.

So, while he waited for more snow to fall, he was focusing on his other medium: ice.

Asmussen uses metal forms to make ice molds. To illustrate it, he uses pumps to circulate water through it. Any impurities remain in the circulating water and clear water freezes from bottom to top. Once it’s thick enough, he cuts the pumps off so they don’t freeze inside.

From there, he began shaping blocks of ice using tools such as saws, a carving blade, and mills. He heats the iron on a metal plate and uses it to smooth the icing and fuse the pieces together. Chisels are used for fine details. From a distance, he uses a torch to remove frost from the outside of the ice, so that people can see through it. As long as the sun does not reach it, the ice remains clear.

This year, Asmussen is working on the “Schreiber Pavement Sculptures” project. It started with a piece called “Sitting Santa,” a life-size replica of old St. Nick. He hoped it would be done by Christmas, but a blizzard thwarted his plans.

Asmussen’s goal is to make ice sculptures every week, weather permitting, during the winter, and to light them from below at night so that they form a shimmering path.

“If we get a good freeze in Lake Superior, we’ll be able to get some blocks out of Lake Superior, which are crystal clear blocks as well, and from there we’ll have a big ice sculpture festival… hopefully.”

However, there are no guarantees in the snow sculpting game, as the weather has to cooperate.

Sitting Santa Claus has been a huge hit so far. Some of his favorite sculptures over the years include a soldier at Schreiber Cenotaph Park, a giant loonie and a big friendly fish. The next piece in the works is a large diamond ring fit for an Ice Queen.

Asmussen said, “It’s a matter of pride for the people in the city that we have something like that going on in Schreber. So, it makes people feel good, which makes me feel good.” “That’s probably the biggest driver — it’s just the joy people get from it.”

For anyone looking to make winter art, Asmussen encourages them to start small and get creative with the tools at their disposal.

His latest project can be seen on his personal Facebook page under the name Kim Asmussen.