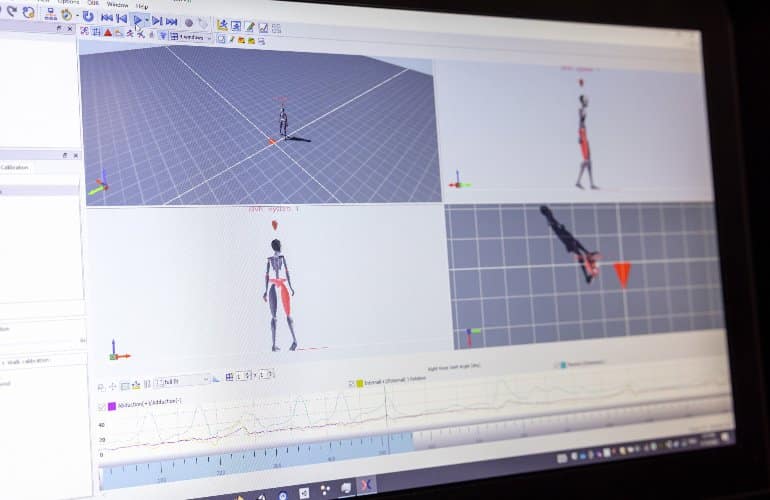 A multi-disciplinary team of researchers has developed a way to monitor the progression of movement disorders using motion capture technology and AI.

DMD and FA are rare, degenerative, genetic diseases that affect movement and eventually lead to paralysis. There are currently no cures for either disease, but researchers hope that these results will significantly speed up the search for new treatments.

Tracking the progression of FA and DMD is normally done through intensive testing in a clinical setting. These papers offer a significantly more precise assessment that also increases the accuracy and objectivity of the data collected.

The researchers estimate that using these disease markers mean that significantly fewer patients are required to develop a new drug when compared to current methods. This is particularly important for rare diseases where it can be hard to identify suitable patients.

Scientists hope that as well as using the technology to monitor patients in clinical trials, it could also one day be used to monitor or diagnose a range of common diseases that affect movement behavior such as dementia, stroke and orthopedic conditions.

Senior and corresponding author of both papers, Professor Aldo Faisal, from Imperial College London’s Departments of Bioengineering and Computing, who is also Director of the UKRI Center for Doctoral Training in AI for Healthcare, and the Chair for Digital Health at the University of Bayreuth (Germany), and a UKRI Turing AI Fellowship holder, said, “Our approach gathers huge amounts of data from a person’s full-body movement—more than any neurologist will have the precision or time to observe in a patient.

“Our AI technology builds a digital twin of the patient and allows us to make unprecedented, precise predictions of how an individual patient’s disease will progress.

“We believe that the same AI technology working in two very different diseases, shows how promising it is to be applied to many diseases and help us to develop treatments for many more diseases even faster, cheaper and more precisely.”

The two papers highlight the work of a large collaboration of researchers and expertise, across AI technology, engineering, genetics and clinical specialties.

Co-author of both studies Professor Richard Festenstein, from the MRC London Institute of Medical Sciences and Department of Brain Sciences at Imperial said, “Patients and families often want to know how their disease is progressing, and motion capture technology combined with AI could help to provide this information.

“We’re hoping that this research has the potential to transform clinical trials in rare movement disorders, as well as improve diagnosis and monitoring for patients above human performance levels.”

The children wore the sensors while carrying out standard clinical assessments (like the 6-minute walk test) as well as going about their everyday activities like having lunch or playing.

In the FA study, teams at Imperial, the Ataxia Center, UCL Queen Square Institute of Neurology and the MRC London Institute of Medical Sciences worked with patients to identify key movement patterns and predict genetic markers of disease. FA is the most common inherited ataxia and is caused by an unusually large triplet repeat of DNA, which switches off the FA gene.

Using this new AI technology, the team were able to use movement data to accurately predict the ‘switching off’ of the FA gene, measuring how active it was without the need to take any biological samples from patients.

The team were able to administer a rating scale to determine level of disability of ataxia SARA and functional assessments like walking, hand/arms movements (SCAFI) in 9 FA patients and matching controls.

The results of these validated clinical assessments were then compared with the one obtained from using the novel technology on the same patients and controls. The latter showing more sensitivity in predicting disease progression.

In both studies, all the data from the sensors was collected and fed into the AI technology to create individual avatars and analyze movements. This vast data set and powerful computing tool allowed researchers to define key movement fingerprints seen in children with DMD as well as adults with FA, that were different in the control group. Many of these AI-based movement patterns had not been described clinically before in either DMD or FA.

This new way of analyzing full-body movement measurements provide clinical teams with clear disease markers and progression predictions. These are invaluable tools during clinical trials to measure the benefits of new treatments.

Similarly, in the FA study, the researchers showed that they could achieve the same precision with 10 of patients instead of over 160. This AI technology is especially powerful when studying rare diseases, when patient populations are smaller.

In addition, the technology allows to study patients across life-changing disease events such as loss of ambulation whereas current clinical trials target either ambulant or non-ambulant patient cohorts.

“The impact of this, alongside specialized clinical knowledge, will not only improve the efficiency of clinical trials but has the potential to translate across a huge variety of conditions that impact movement.

” It is thanks to collaborations across research institutes, hospitals, clinical specialities and with dedicated patients and families that we can start solving the challenging problems facing rare disease research.”

Joint first author on both studies, Dr. Balasundaram Kadirvelu, post-doctoral researcher at Imperial’s Departments of Computing and Bioengineering, said, “We were surprised to see how our AI algorithm was able to spot some novel ways of analyzing human movements.

“We call them ‘behavior fingerprints’ because just like your hand’s fingerprints allow us to identify a person, these digital fingerprints characterize the disease precisely, no matter whether the patient is in a wheelchair or walking, in the clinic doing an assessment or having lunch in a café.”

Joint first author on the DMD study and co-author on the FA study, Dr. Valeria Ricotti, honorary clinical lecturer at the UCL GOS ICH said, “Researching rare conditions can be substantially more costly and logistically challenging, which means that patients are missing out on potential new treatments. Increasing the efficiency of clinical trials gives us hope that we can test many more treatments successfully.”

“We are thrilled with the results of this project that showed how AI approaches are certainly superior in capturing progression of the disease in a rare disease like Friedreich’s ataxia. With this novel approach we can revolutionize clinical trial design for new drugs and monitor the effects of already existing drugs with an accuracy that was unknown with previous methods.”

“The large number of FA patients who were very well characterized both clinically and genetically at the Ataxia Center UCL Queen Square Institute of Neurology in addition to our crucial input on the clinical protocol has made the project possible. We are also grateful to all our patients who participated in this project.”

About this AI and motion research news

Artificial intelligence has the potential to revolutionize healthcare, yet clinical trials in neurological diseases continue to rely on subjective, semiquantitative and motivation-dependent endpoints for drug development.

To overcome this limitation, we collected a digital readout of whole-body movement behavior of patients with Duchenne muscular dystrophy (DMD) (n = 21) and age-matched controls (n = 17).

Movement behavior was assessed while the participant engaged in everyday activities using a 17-sensor bodysuit during three clinical visits over the course of 12 months.

Finally, using Bayesian optimization, we constructed a behavioral biomarker, termed the KineDMD ethomic biomarker, which is derived from daily-life behavioral data and whose value progresses with age in an S-shaped sigmoid curve form.

The biomarker developed in this study, derived from digital readouts of daily-life movement behavior, can predict disease progression in patients with muscular dystrophy and can potentially track the response to therapy.

Friedreichʼs ataxia (FA) is caused by a variant of the Frataxin (FXN) gene, leading to its downregulation and progressively impaired cardiac and neurological function. Current gold-standard clinical scales use simplistic behavioral assessments, which require 18- to 24-month-long trials to determine if therapies are beneficial.

Here we captured full-body movement kinematics from patients with wearable sensors, enabling us to define digital behavioral features based on the data from nine FA patients (six females and three males) and nine age- and sex-matched controls, who performed the 8-m walk (8-MW) test and 9-hole peg test (9 HPT).

We used machine learning to combine these features to longitudinally predict the clinical scores of the FA patients, and compared these with two standard clinical assessments, Spinocerebellar Ataxia Functional Index (SCAFI) and Scale for the Assessment and Rating of Ataxia (SARA).

The digital behavioral features enabled longitudinal predictions of personal SARA and SCAFI scores 9 months into the future and were 1.7 and 4 times more precise than longitudinal predictions using only SARA and SCAFI scores, respectively. Unlike the two clinical scales, the digital behavioral features accurately predicted FXN gene expression levels for each FA patient in a cross-sectional manner.

Our work demonstrates how data-derived wearable biomarkers can track personal disease trajectories and indicates the potential of such biomarkers for substantially reducing the duration or size of clinical trials testing disease-modifying therapies and for enabling behavioral transcriptomics.